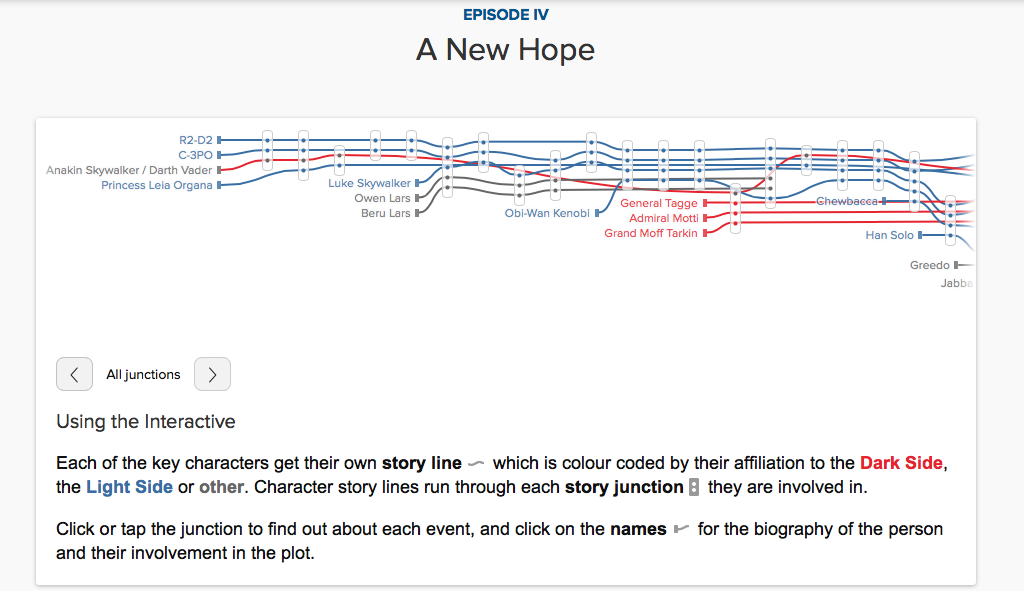 In the lead-up to the much-anticipated release of Star Wars: The Force Awakens, we set out to log and chart every scene from every Star Wars movie. Yes, we even suffered through the prequels.

We took our inspiration from xkcd's hand-drawn movie narrative charts, but our aim was to write code that could adequately replace artist Randall Munroe's illustrations.

Our charts show all the scenes from the first six Star Wars movies, mapping out interactions between the characters.

Why did we take on this galactic-size mission? Our aim was to make a complex saga digestible and easy to explore.

But that isn’t to say complexity doesn’t sometimes help tell the story. Take, for instance, the obvious visual difference in our charts between the original Star Wars trilogy and the prequels.

Our charts suggest the original films have a relatively simple structure: they centre on a handful of key characters and follow their adventures as they fight 'the dark side'.

The prequels see a proliferation of characters, and unfortunately that includes Jar Jar Binks!

Our charts demonstrate how George Lucas’s movie-making style changed from the originals to the prequels, and show the latter have a much more complicated structure.

Finally, our charts are just plain fun for fans. They can relive the journey of their favourite characters, pinpoint the moment they fell in love with Hans Solo, and track Jar Jar Binks’s slide into obscurity.