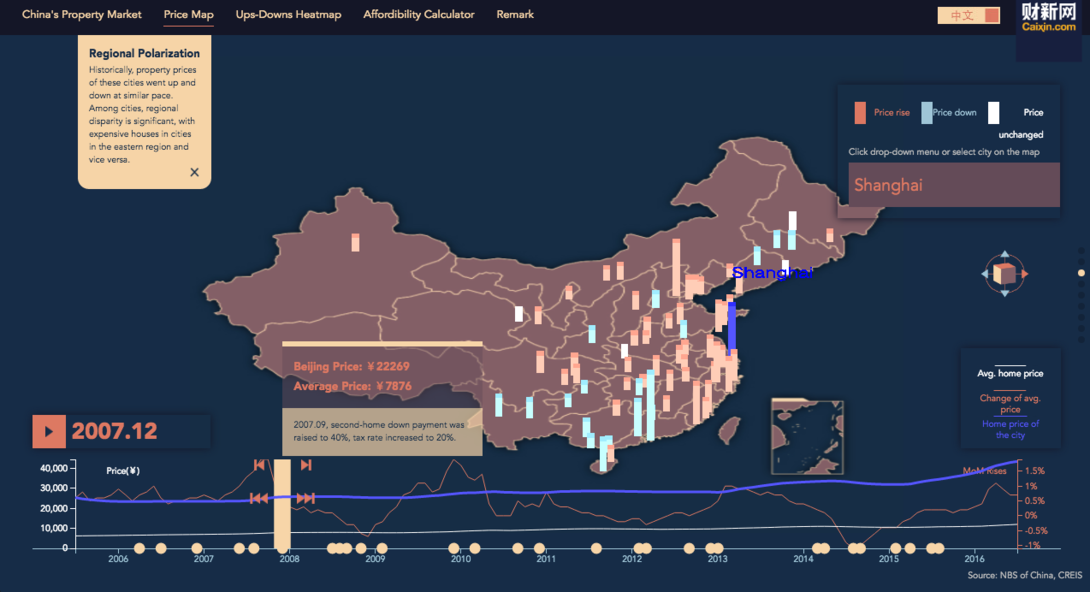 The real estate market has been one of the main driving forces of China’s economy for more than one decade. This fast growing industry also contributed to social inequality in urban China.

--Newsworthiness: In mid 2014, the growth of China’s property market was slowing down. The PRC government responded promptly with a series of powerful boosting policies. It was also proposed that migrant workers in the nation to be the new demand driving force of the property sales in urban areas. The team therefore considered the topic’s newsworthiness and decided to work on a data-driven journalism project about the housing market.

--Animated Interactive Map: The bars in the interactive map represent the cities’ property price. The map also serves as an animation to portray the month-by-month changes in prices throughout the decade. The users can choose a particular city in the map to see a more detailed line chart about that city. Related policies concerning the housing market also listed on the page. The map also shows the regional disparity of price that cities of eastern region have a higher property price than cities in the central and western regions.

--Explanatory Journalism: An article is included in the project to explain to the users the history and transformation of China’s housing system, with graphs and infographic to further describe the trends and patterns.

--Discovery through Data Visualization: On a heatmap, month-on-month changes in property price of each city are characterized in colours, with red grid representing a rise and blue grid representing a down according to the tradition of colour usage in China. When the data is structured, patterns are discovered. Through data visualization, it is discovered that it takes a longer time for the boosting policies to shore up the market in the 2014 slump than the previous ones. Findings are included in the page to facilitate understanding.

--Engaging Users by Housing Affordability Calculator: Users can find out how many years does it take for them to buy a house in a particular city. The calculator also included the concept of income-to-price ratio to illustrate how hard it is for ordinary citizen to purchase an apartment.

--Data Collection: Economic data is one of the very few datasets that are available in a usable format in China. The team therefore decided to make full use of it. And multiple data sources, both from the official publications and commercial research companies, were used. 70 cities are included in this project to represent and compare the situation of megacities and smaller cities.

--Mobile Adaptation: For the mobile version (only in Chinese: http://datanews.caixin.com/mobile/home/), user’s location is detected by the system and the page will highlight the corresponding city. In China, mobile news reading is more predominant. On the mobile version, a message to encourage users to check the desktop version is attached. The project also jumps automatically between versions according to the device.