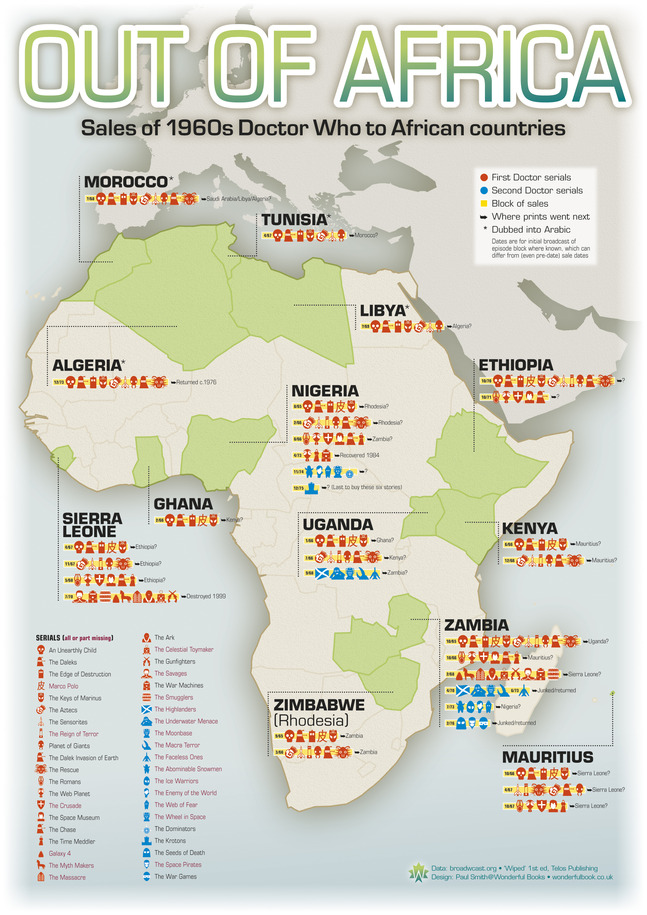 Sales of 1960s Doctor Who to African countries by Paul Smith

Doctor Who fans frequenty speculate about the likelihood of recovering episodes from the 1960s that are no longer held in the BBC's archive. In the spring of 2013, one rumour really got fans' hopes up by suggesting a major proportion of the 106 missing episodes had been found and were about to be returned to the BBC. As ever, no proof was provided by the many people claiming to have heard of the discovery from unnamed sources, but fans seemed largely taken in by the audacity of suggesting such a large recovery of material.

An unidentified African country (or countries) was soon being discussed as the site of the discovery, and indeed the BBC had sold the series to several TV stations across the continent in the 1960s and early 70s. Such film copies licensed to overseas broadcasters are the only chance for these episodes' survival and account for most of the recoveries made in the last 30 years. But fans began speculating about possible countries irrespective of whether they had actually bought the programme, and naming supposedly recovered episodes even though they had never been shown in Africa.

To try to clarify the possibilities, I produced this infographic showing which African countries licensed which 1960s episodes of Doctor Who, when they broadcast them and where the film prints the BBC sent them might be now. Much research has been done into the sale of Doctor Who overseas and subsequent attempts to recover those film prints based on primary evidence from (incomplete) BBC records â€” most notably by Richard Molesworth in his book “Wiped!” (Telos Publishing, 2010) â€” while the website broadwcast.org catalogues when episodes were actually broadcast around the world based on evidence from local newspaper TV listings. These were my two sources for the graphic.

As I was dealing with partly geographic information, a map was the obvious form to use. I also visualised the Doctor Who episodes under consideration with an icon based on a design element unique to each one. These were grouped into the batches that each country had licensed at various times, which revealed how often the same groups of episodes had been redistributed around the continent. There are few records of what happened to film prints after a particular broadcaster had shown them (they were supposed to return them to the BBC, destroy them or send them to another country that had since arranged to show the programme) but using the dates of transmission, where known, it was possible to suggest the likely route the episodes had taken to identify which countries they might have ended up in (whether subsequently destroyed or not).

The infographic was posted on several Doctor Who discussion forums where it helped negate some of the wilder speculation and highlight which stories were unlikely to be recovered. Although fans never give up hope, this rumour of a sizeable recovery is now considered to be sadly untrue.