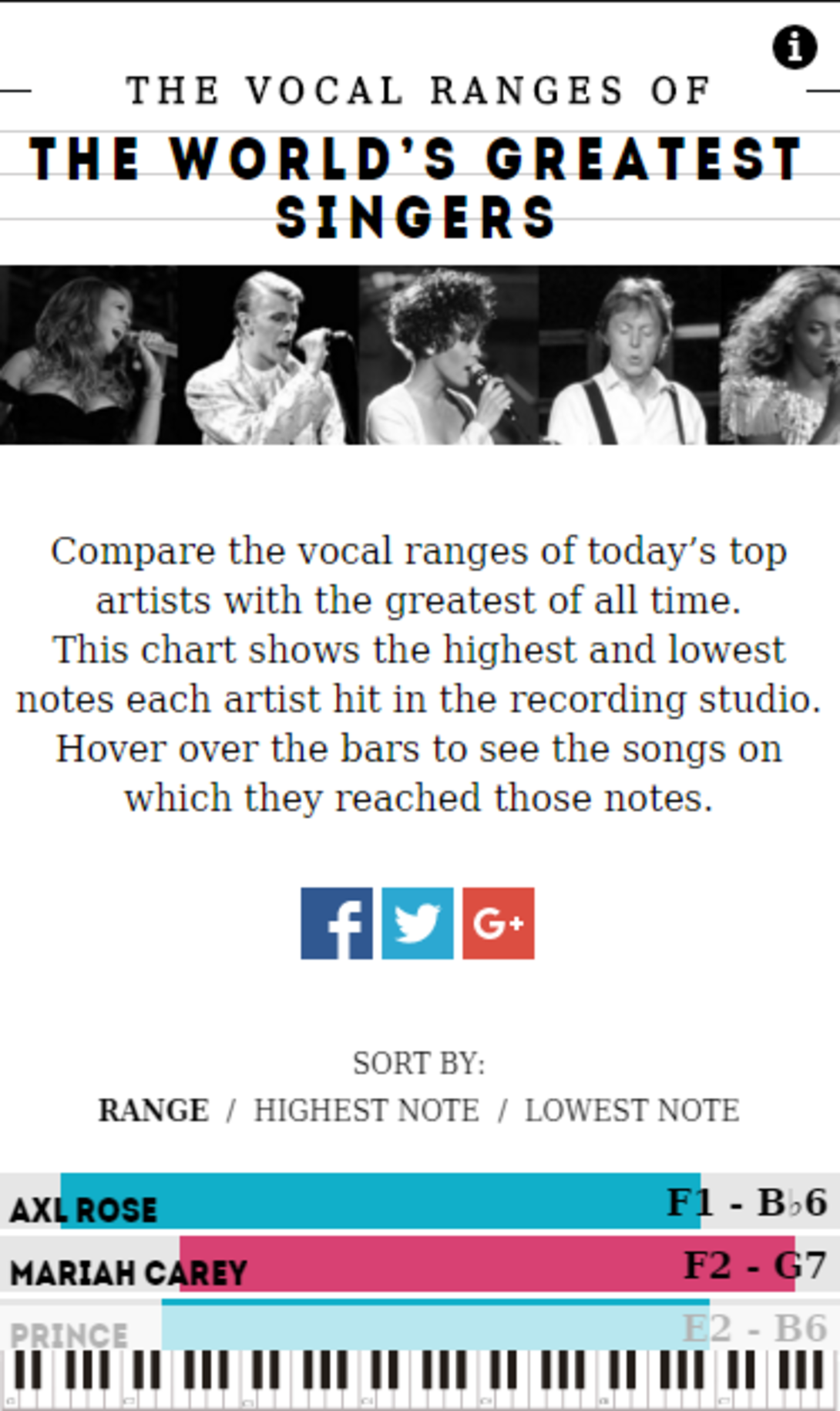 The Vocal Ranges of the World’s Greatest Singers by Distilled

“Who is the greatest singer?” is something which is debated endlessly. Data alone can’t easily answer this question, however there are data points which can add to the conversation. So, when Head of Creative, Mark Johnstone, stumbled across The Range Place (an online community who curate data on the vocal ranges of a huge number of singers), he was keen to see what the data revealed.

Whilst the data on the site is fascinating, it’s not displayed in a readily digestible format, which makes a comparison of the various vocalists’ ranges difficult. The data was crying out to be visualised.

The first challenge was deciding which vocalists to include. We liked the idea of comparing popular contemporary singers alongside those who’ve stood the test of time. The Rolling Stone's ‘100 Greatest Singers of All Time’ combined with those nominated for the upcoming Billboard Music Awards served as our seed list.

The data revealed that Guns N’ Roses frontman Axl Rose has a greater vocal range than Mariah Carey. We knew we had a great story, the next step was to bring it to life.

The most challenging aspect of the piece was making an abstract concept like vocal range readily understandable to those without an academic background in music. The introduction of the keyboard helped bring concreteness, as users can see just how large a vocal range each singer has. We also wanted to make the piece easy to explore, so we included the option for users to sort the list of vocalists by vocal range, highest notes and lowest notes.

Almost half the traffic to ConcertHotels.com comes from mobile devices. As such, it was imperative that the content was easy to consume regardless of the device it was viewed on. We elected to design the piece mobile-first (i.e. we designed the mobile version before tackling the desktop version) in order to ensure a great user experience on mobile.

The primary purpose of the project was to create a piece of content which would appeal to music lovers of all ages and garner online coverage to increase search visibility and brand recognition for ConcertHotels.com.

The piece went far further than we thought possible. To date, it has been featured on more than 1,300 sites including Rolling Stone, Huffington Post, The Guardian, Telegraph, USA Today, Daily Mail, NBC and Time.

Within 48 hours of launch the piece had been viewed over 1 million times on the ConcertHotels site and has attracted more than 2.5 million visits since launch.

The piece was also widely shared with over 112,000 Facebook interactions, over 5,000 tweets and best of all, Axl Rose commented on the piece.

We’ll leave you with a few words from our client:
“I was so impressed with the Distilled team throughout the process, and the results they’ve achieved are incredible. I’m a huge Guns N' Roses fan, and having Axl himself comment really was the icing on the cake.”
~ Michael Kelly, Concert Hotels