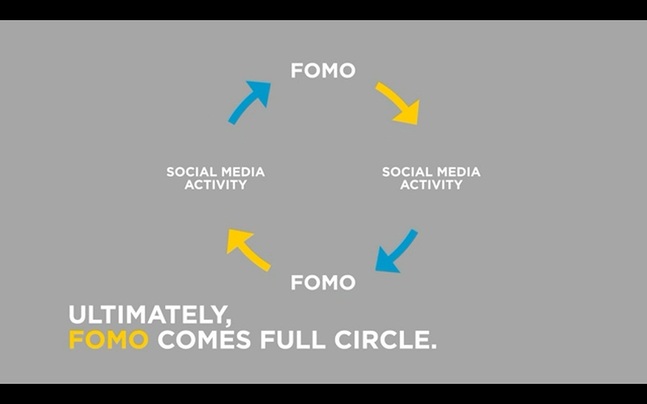 FOMO, or the fear of missing out, is the uneasy and sometimes all-consuming feeling that you're missing outâ€”that your peers are doing, in the know about or in possession of more or something better than you. While we've always had a fear of missing out, today it's exploding with the onset of real-time, location-based and social media tools. We're exposed more than ever before to what others are doing, and we're filled with a gnawing uncertainty about whether we've made the right choiceâ€”not just in a given moment but in stages of our lives as well.

Created as a companion to our March 2012 JWTIntelligence report and included in a 2012 SXSW Interactive presentation, “Fear of Missing Out (FOMO)” uses an up-tempo soundtrack, clean and bold animations, and engaging visual transitions to capture and keep the viewer's attention from one piece of information to the next. Set against a light grey backdrop, the vibrant colors of the characters pop as they serve to highlight and enact the text that appears on the screen; each transition moves the content along at a seamless and snappy pace, without jarring or losing the viewer along the way; and the soundtrack complements and helps set the tone. Overall, as the different pieces come together, each aspect works harmoniously to convey the uneasy and sometimes all-consuming feeling that you're missing out, all in an entertaining and charming manner.